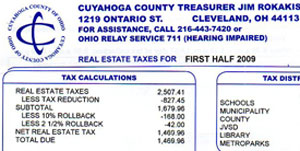 Neither needs to be the case. It’s lazy reporting not to do the math. Yet the math can be made simple.

Ohio lawmakers  in 2013 eliminated a previous contribution by the state to pay 12.5% for the homeowner’s local property tax bill.  Now the homeowner pays the entire bill for new taxes.

New taxes or the new effective rate (explained below) for replacement taxes.

Renewal of existing taxes without an increase

Effective rate: Older taxes often no longer are being taxed at their original rate because of changing property values. For example, a 5-year levy approved a few years ago might have dropped to 3 or 4 mills for current taxing purposes. The effective rate, not the original, is used to calculate taxes. The county auditor, county fiscal office or the Ohio Department of Taxation can provide the current effective rate for each.

If your numbers are different from what is being circulated on campaign literature (and it will be from time to time), question the source of the literature.

If they dispute your math, ask your county auditor or fiscal officer to confirm. As long as you followed the steps above, you’ll be right every time.

It’s important to note, however, that the formulas listed above apply only to the value of owner-occupied homes. That’s the number most readers want to know.

If you’re ready to learn more, read on.

Appraised Value
Nearly all references reporters make to home values should be to the appraised value. This is the value the home would be worth for resale. As a standard in tax stories, you can use $100,000 because readers can easily adjust the amount for their own circumstances. However, this does not prevent you from noting, for example, that the typical home costs $250,000 or $75,000 in the city being discussed. Check with the auditor to determine if the “typical” value is accurate.
Assessed Value
We almost never use this in print. But for background, Ohio real estate property tax rates technically are applied to assessed values. This is 35 percent of the appraised value. There is no need to be concerned with assessed values when dealing with real estate taxes. Other property taxes, such as those on inventories, factor the assessment differently.
Effective Rate
This is the tax rate used to calculate taxes. This is different from the total mills. It is reduced by House Bill 920 (next definition).
House Bill 920
This is the state law that prevents many real estate tax levies from collecting more money as property values increase (much like income taxes grow as incomes increase). Tax issues, though stated in mills, often are seeking a set dollar amount per year. So when values go up, the actual rate goes down to collect the same amount of money. There are exceptions. Cities, for example, sometimes are exempt under their city charters. Also, there is a floor of 20 mills for certain taxes for schools. Once the rate drops so low, it doesn’t fall any more. And in a place where property values are falling, House Bill 920 can cause the tax rate to go back up to the original level. Ask a treasurer, auditor or finance director to explain specific situations.
Mill
Why not use the word “mill”? Won’t voters see it on the ballot and in campaign ads? Yes, they will see “mill” elsewhere. But the voters will better understand tax proposals if you present them in dollars and cents. Only after clearly explaining the tax proposal in dollars should you use the word mill. An example paragraph lower in the story could read: “The tax will appear on the ballot as a 6.1-mill levy.”
Rollbacks
Until the law change in 2013, the state paid 10 percent of the tax bill for all residential property owners, and usually a total of 12.5 percent for owner-occupied (non-rental) homes. This shows up on the tax bill as rollbacks. Tax bills for owner-occupied homes were reduced by 12.5 percent. So for every $1 of new taxes approved in a district, a homeowner actually paid only 87.5 cents. The state picked up the rest and paid the money. This is still the case for taxes approved before November 2013. But, starting with that election, the state contribution has been eliminated. The homeowner is now responsible for 100 percent of the increase from all new taxes.
A government can preserve the 12.5 percent subsidy for old taxes, even if they are changed to a higher amount, if the wording on the ballot is to “renew” and “increase.” However, when taxes are replaced, the 12.5 percent subsidy is lost for the entire tax. Cuyahoga County did this with a human services tax in November 2013, losing the subsidy for homeowners. The Cleveland Metroparks, however, used the renew and increase method, preserving the subsidy for property owners.