Nothing beats hard-coding graphics and data right onto your website, but that’s not always possible – sometimes because of technical limitations and other times simply because of a lack of time.

For that reason, many of Google’s tools have become popular as embed options. But Microsoft would like a slice of the pie. A Microsoft representative at an Investigative Reporters and Editors conference in St. Louis recently showed me a slick alternative. I’ve begun using it in selective situations.

Simply take an Excel spreadsheet, spruce it up in the Excel “table” view and upload it to a Hotmail account in the document section known as SkyDrive. Use the share option to get an embed code. Take a look at the graphic at the bottom of this weather story. The bars add a graphic eliminate to what otherwise may have been a simple chart, and I like the  ease for self-sorting. 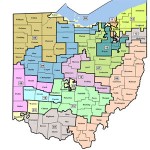 Much is often said about the impact of who gets to draw the congressional district lines every 10 years; so we took a look at history and found it really does matter.

After the 2000 Census, for the first time in 50 years, one party in Ohio controlled the entire process – both chambers of the Statehouse and the governor’s office.

The Republicans, with that full control, drew the lines and won 62 percent of the congressional races in Ohio from 2002 through 2010 despite winning only 51 percent of the overall vote.

Read our findings. It will be interesting to see whether the GOP enjoys the same kind of success from their new lines for  2012 through 2020. The lines were again drawn with the Republicans holding full control of the process.

We took a dive into the funding of Division I NCAA sports and found that – outside of Ohio State – every other public school in Ohio is dipping into student fees, general funds or other public sources to operate their sports programs.

On average, it amounts to about $700 per student on campus – directly through mandatory student fees or other sources. Supporters say NCAA sports at the top level add to campus life and elevate the profile of places like Kent State, Akron and Cleveland State. Others question such spending, especially the part that goes to six-figure coaching salaries in some sports.

Read our award-wininng package on money in college sports. You’ll find details about all the Ohio Mid-American Conference schools, plus Cincinnati, Cleveland State, Wright State and Youngstown State. The private schools declined to share their information.