YOUNGSTOWN, Ohio – Youngstown State University was kind enough to invite me to take part in “Press Day,” giving me an opportunity share the potential of data-driven journalism with students and prospective journalism students.

I’m always happy to talk about how journalists can craft unique, impactful stories by developing a toolbox full of data skills.

If you were part of the Oct. 4, 2016, session and would like to review the stories and tips discussed, follow this link.

I put together a primer to help journalists be realistic with crowd estimates. This could be especially useful when there is no official estimate from an independent party – only guesses from promoters of an event boasting about how many people were there. In short, only so many people will fit into any space. Read more details and background on crowd estimating at this link. The video below offers a brief overview.

The faculty at Tim Russert Department of Communication & Theatre Arts at John Carroll University has invited me to speak to students about data journalism. Looking forward to the visit on the evening of April 5. And thanks to Carrie Buchanan, assistant professor of journalism, for arranging things. I always enjoy spreading the word about the potential of data journalism. 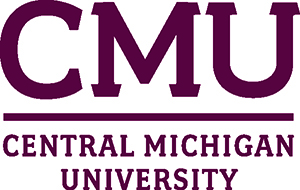 I was thrilled to get the opportunity Oct. 8-9, 2015, to talk data journalism with students and faculty at Central Michigan University’s Department of Journalism, one of just two nationally-accredited journalism programs in Michigan.

We spent an afternoon talking to students, encouraging them to open their eyes to data journalism and offering some tips to get them started. Then I had an opportunity to trade ideas with faculty during a full day workshop.

Look for future data journalists to come out of CMU. There are some bright and interested minds there.

Where are taxes the lowest and highest? Not property taxes. Not income taxes. Not sales taxes. But all taxes.

We set out to attempt to answer that question for a series of Midwest and Eastern states. We looked at all the major taxes from the local level up through the state and added up the bills. Check out the online calculators and analysis that were the result of this work. We called it “11 takes on taxes.”

One of the shortcomings of Microsoft Excel is that you cannot easily obtain the median for several different variables. Mystery solved. I recently came across this link to step you through a formula that – at first glance – may look complicated. But it’s really not too difficult to recreate.

One note: be sure to exit the formula cell with this command – control/shift/return. That creates an array function.

The Census Bureau really stepped up its offerings in the last couple of years for things that can be embedded in your own web pages. Especially good were the interactive state map/graphs as the Census 2010 numbers were being released some months back.

In Ohio, the governor is proposing a changes in the sales and income taxes. The rates would go down for both, but what the sales tax is applied to would be greatly expanded.

So the question became, what’s the impact? The calculations are simple for sales taxes. Here’s a method you might consider if you want to estimate what people in different income and family situations pay a year in sales taxes. I used tables produced by the IRS, that take into account the differences from state to state.

Read how this worked out in Ohio, and how we completed the analysis by applying the systems from other states to Ohio.

Sometimes huge databases offer opportunities for fun stories other than their original purpose.

I’ve gotten some mileage out of Ohio’s database of about 8 million registered voters. The most recent example was ranking names for popularity and by age, to show how some once popular names like Mary are way down the list among young adults. Check out the name game database story.

Earlier, using a different version of the state’s database, I was able to identify which names lean Republican and Democrat. In both cases, we offered databases online so people could search for their own names. 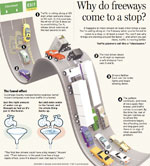 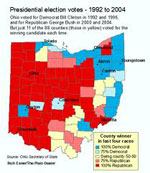 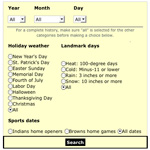 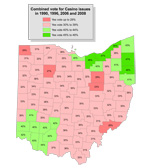